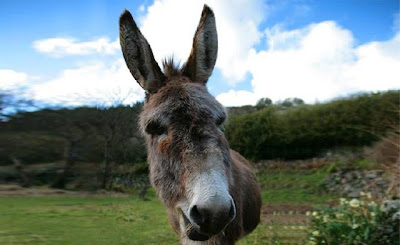 A Zimbabwean man has told a court that he hired a prostitute who during the night transformed into a donkey, and that he is now “seriously in love” with the animal, state media said on Wednesday.

“I think I am also a donkey. I do not know what happened when I left the bar, but I am seriously in love with the donkey,” Sunday Moyo told the court, according to The Herald newspaper.

Moyo, 28, was arrested in the town of Zvishavane, about 300 kilometers (185 miles) south of the capital Harare on Sunday.

He said he had paid $25 for a prostitute, and was surprised Sunday morning when he heard people accusing him of having sex with a donkey.

Moyo has been charged with bestiality. The court has ordered him to undergo a mental examination, The Herald said.

I don't know what kind of mental disease this man has, but I think he killed the prostitute and to cover it up he had sex with a donkey... Genius???